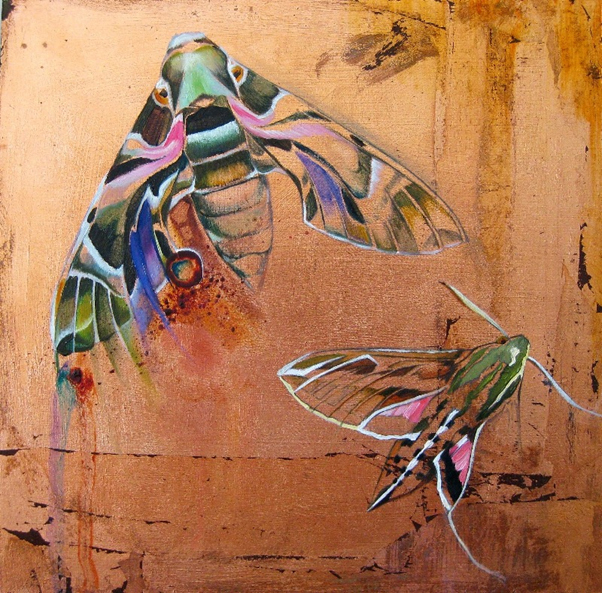 Oil on canvas with copper leaf

on your cranium in a dream

you should open your eyes

and pay them attention.

of a moist slice

of coconut cake after

the server at Denny’s

plops it wobbly on the table.

a warm bowl of morning

oatmeal and your breath

burned into the skin

of your CDs.  The idea

in my glove box,

made us all rise.

stirred by a mystic

as the news, traveler

Rikki Santer’s work has appeared in various publications including Ms. Magazine, Poetry East, Slab, Slipstream, [PANK], Crab Orchard Review, RHINO, Grimm, Hotel Amerika and The Main Street Rag. Her work has received many honors including six Pushcart and three Ohioana book award nominations as well as a fellowship from the National Endowment for the Humanities. Her tenth collection, How to Board a Moving Ship, has just been released by Lily Poetry Review Books.

Stephanie Liebetrau lives and works in Port Elizabeth/ Gqeberha. She completed a Diploma in Graphic Design at Cape Technikon. Her evocative oil paintings & collages fuse South African women with natural elements to create hybrids that diffuse the boundary between the real and recreated. She explores themes such as Eco-Feminism and remains fascinated by the “fragile hieroglyphics” in nature’s design. Her work is often ekphrastic, inspired by poetry, scripture and sacred texts.