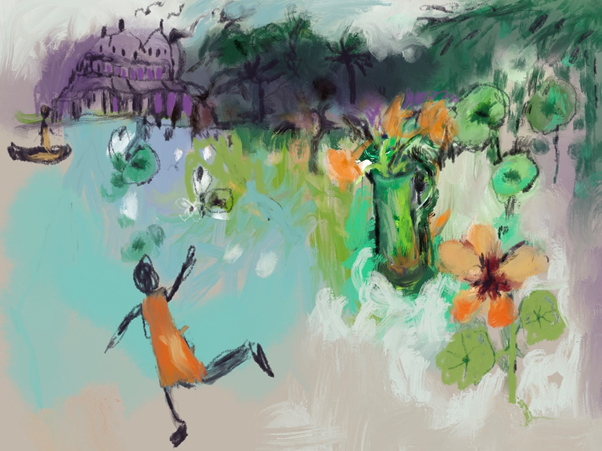 who has done more—your Titans of Tech,

changing history with their (mis)information,

or one cosseted Southern woman,

caught up in the toils of a hardscrabble boy

from the hill country, but nonetheless

relentlessly persistent in her vision?

From a distance, your towers dominate,

but down here, almost in the water,

for a million bats or more

on their nightly quest for corn moths—

a whole rich and fertile legacy

of urban biome that now,

uniting me with water,

from all the other plastic

floating in the lake.

Passing under the railway bridge,

I take the vibrant advice

of a graffiti artist: “BREATHE,”

remembering those who can’t now.

It is a prayer that the world

will not prove disposable.

Lorna Wood is a violinist and writer in Auburn, Alabama. Her poetry has appeared in Angel Rust (Best of the Net nominee), Coastal Shelf, Escape Wheel (great weather for MEDIA), and Poetry South (Pushcart nominee). She has also published fiction, creative nonfiction, and scholarly essays. Find out more at amazon.com/author/lornawood.