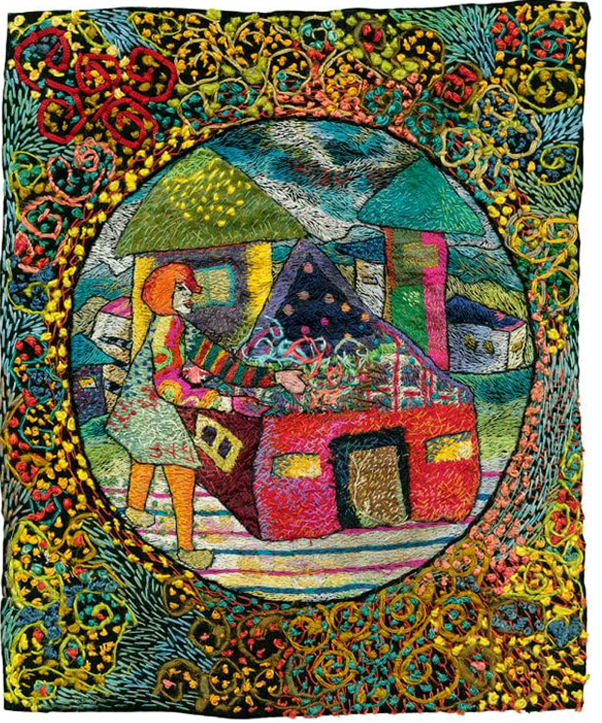 Through the steady hiss of traffic rolling through standing water, I hear a voice speak at the other end of the line. It is my mother’s care home. I am in my garden, raindrops dance and bounce on the tiled roof. There is a sign on the pebble-dashed wall of the house.  It reads: Achadh Meadhanach.

‘She says today is “bye-ram”; do you know what that means? She seems upset no one is here.’

‘Bayram,’ I say. ‘It’s Turkish for festival. She means Eid.’

‘It doesn’t say she’s Muslim, here on the system,’ the voice says.

‘Well, she celebrated it where she grew up, in Turkey, but then she met my dad, an agnostic Scot. She switched to Christmas.’

Behind the garden gate, by a bridge humped over a swollen river, a traffic light flashes from amber to green. I see a woman with a pram at the crossing, strands of wet hair sleek across her cheek, skin under her eyes dark with fatigue.  I tell the voice that I’ll visit briefly. She sounds relieved. The voice then says, ‘She sometimes forgets English or drops into Turkish without realising. It happens with her illness; sometimes the second language gets forgotten. She might eventually revert to her mother tongue.’

I sit, facing my mother. She has a shimmering, violet powder on her eyelids, and a chiffon scarf which delicately shifts about her shoulders when she moves. She is thin, eyes sharp.

‘Mutlu bayramlar,’ she says, lifting her veined hand in greeting. ‘I can tell you’re Turkish.’

I tell her I’m a lawyer. A woman with a yellow apron comes over and pours us black tea. She smiles at my mother.

My mother ignores her and says, ‘Ben avukatım. I am a lawyer too.’

Casting a sidelong glance at the aproned woman, she continues, ‘It’s good to finally meet someone here of my own class in society. You know, there are some here who sold their homes to pay for care. There are others who get the very same care for free, from the state, because they have nothing!’

I sip the tea, which is steaming and bitter. She says, ‘When my brother was at university in the 60s, in İstanbul, he was always in trouble for being a communist. He protested, plastered posters all over Galata, fighting for the working class. He was a good boy, evet, evet, helping the disadvantaged. We are lucky, being lawyers. Secure. We can hold our heads high.’

I remember once watching her cry. When she moved to the UK her qualifications were worth nothing. Her degree certificates, enclosed in plastic wallets, lay limp across her raw palms. I can’t tell her that she spent years cleaning, after my father left her, and that she doesn’t pay for her care here either. I do.

She scowls at the greenery outside the window, Scottish firs with branches waving in the wind. In her mind, her life here is now unlived, like a touching book once read is shelved, and forgotten. Scotland became her home, its happy memories scrubbed away with the bad. To her, I am just a dream figure. A doctor told me the heart never forgets a child. If true, hers guards the memory of me like a jealous secret.

I remove a Turkish dessert from its wrapping. Strings of golden pastry, straw-like, saturated in syrup and covered with crushed pistachio. ‘Kadayıf,’ she says. ‘My sister-in-law made the most güzel kadayıf one bayram.’

We eat it together, washing away its sweetness with lukewarm tea. When I was five, my mother took me to Eastern Turkey to visit family, during bayram. I sat on her lap in the shared dolmuş taxi. My cousins and I wore new clothes, the neighbours gave us treats and toys. My father brought a crumbling Scottish sweet, called tablet. Each square was wrapped with a violet bow. After dinner, we ate kadayıf. My cousins then asked me to choose a favourite, tablet or kadayıf; ‘Taaah-blet veya kadayıf?’ I loved them both, but I chose one. Another night, I would have chosen the other. I watch my mother savour the dessert now. We both remember her sister-in-law serving it. It is a shared memory, yet she does not see me in it. She is steeped in love she cannot taste. Our eyes meet, and she smiles.

I arrive home. The night sky is thick with cloud and I am held in the cool, featureless darkness. The engine is off, the cold slowly seeping into the car. I look at the sign on the house: Achadh Meadhanach. It means ‘the Middle Field’ in Gaelic, which is what the land once was, sandwiched between two estates, before all of it was sold to developers. There is a river that runs through the land, weaving it together. As it flows, the river takes with it pebbles, dirt, drips and trickles from streams, churning, breaking up and remoulding, making all part of itself. This river has a name, an identity, as it is always the same, and yet its rushing water is renewed and different from one moment to the next.

‘What’s brought me to this country, in particular?’ my mother had asked, looking out at the green, alien landscape.

‘Evet,’ I replied. ‘We’re both winding our way through.’

Ayla Douglas is a Scottish-Turkish writer. She is published in Product and No Parties magazines. In 2021 she was selected by Extra Teeth magazine for a writing mentorship and shortlisted by the Glasgow Women’s Library for their Bold Types creative writing competition.

Annette du Plessis is a South African artist who works in many different media, including embroidery. She has been awarded an FNB Craft Vita Award and a Certificate of Excellence from the Eastern Cape Department of Arts and Culture. She has been involved in several community art projects, serving some of the poorest communities in South Africa. Her work is in many private and public collections. Read more about her creations here: https://annetteduplessisembroideryart.wordpress.com/